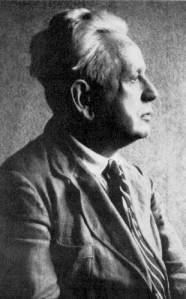 Ernst Cassirer’s Philosophie der Aufklärung (1932) is one of the handful of books that everyone who works on the Enlightenment must, at the very least, pretend to have read. In contrast, the entry Cassirer wrote for the first edition of the Encyclopedia of the Social Sciences is a text that few, if any, scholars working on Enlightenment mention at all. This is hardly surprising. What self-respecting scholar reads an encyclopedia article written in the last two centuries aside from its author who (one hopes) at least got around to reviewing the proofs (while perhaps wondering whether the effort that went into producing them was worth it)?1 And while Cassirer aficionados may have reason to consult his Encyclopedia Britannica article on “Neo-Kantianism,” there would seem to be little reason to bother with an article on a subject that Cassirer covers in a book that everyone is supposed to have read.

Several years ago, I started assigning Cassirer’s article in the first week’s reading for my undergraduate survey course on the Enlightenment, figuring it was a quick way of exposing students to an approach to the period that would be quite different from the one that I would be offering (in earlier iterations of the course I’d used the opening chapter of The Philosophy of the Enlightenment — a better choice, but a bit daunting for the first class meeting). Looking over the text again prior to this start of this term, I was struck by the differences between Cassirer’s article and his book.  So, I thought I’d offer a few comments on it.

This post will discuss what we know (and what we don’t know) about the origins of Cassirer’s encyclopedia entry. A sequel will explore its overall argument. I suspect that what I will say here will contribute little to the already massive literature on what is regarded — and certainly ought to be regarded — as Cassirer’s most significant contribution to our understanding of the Enlightenment. But it is possible that a consideration of his article in the Encyclopedia of the Social Sciences might shed some light on how Cassirer began to piece what would become the Philosophy of the Enlightenment together.

Cassirer and the Encyclopedia of the Social Sciences

A joint project of ten American scholarly associations (among them, the American 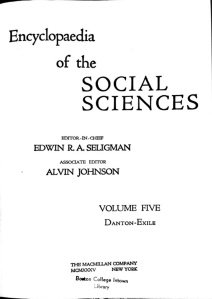 The helpful finding aid for the project’s papers, which Macmillan donated to Hampshire College in 1969, indicates that Seligman was responsible for initiating contacts with European scholars during a trip to the continent in 1927. Having received what the finding aid characterizes as an “enthusiastic response,” work began.

The procedure worked out for the organization and composition of the Encyclopaedia was as follows. Lists of possible topics were widely circulated for comment and criticism, then responsibility for individual articles carefully assigned to authorities in each field. Translation or Englishing, if needed, fact checking, and bibliographical checking of completed articles were all performed by the editorial staff in New York, and any doubtful points as well as editorial revisions were referred back to the original author. Final proofreading of the typeset galleys was also done by the editorial staff.

Presumably Cassirer was among the European scholars contacted by (and, perhaps, visited by) Seligman in 1927. Alternatively, he may have been contacted by the Heidelberg economist Carl Brinkmann, who served on the editorial board.  Cassirer’s article appeared in volume five (which, in a cruel coincidence, begins with an article on “Danton” and ends with one on “Exile”), which was pubished in September 1931.3 The Preface to The Philosophy of the Enlightenment, which sought to marshall the spirit of the Enlightenment against a world about to collapse into barbarism, was dated October 1932 — a year after the publication of appearance of his entry on Enlightenment in the Encyclopedia of the Social Sciences.

On the Genesis of the Article

It is clear, then, that Cassirer wrote the article sometime between 1927 and 1931. One further date is helpful in understanding the relationship between Cassirer’s article and his book. According to Toni Cassirer, research for Philosophy of the Enlightenment was done during the summer of 1931 at the Bibliothètique Nationale in Paris. This means that Cassirer must have completed his article on Enlightenment prior to beginning his work at the Bibliothètique Nationale (as we’ll see in the sequel, the text itself would seem to bear this out) and may very well have been contacted by Seligman about contributing to the proposed encyclopedia as early as four years before he went to Paris to complete his work on the The Philosophy of the Enlightenment. The import of this (admittedly somewhat shaky) chronology is that Cassirer’s contribution to Seligman’s encyclopedia might well be viewed as a preliminary sketch of an account of the Enlightenment that would worked out in detail only after the article had been sent to Seligman for what Hampshire’s finding aid describes as “translation or Englishing.”

It is, I hope, clear that I am hedging quite a few bets in the previous paragraph. Much remains puzzling about the writing of this article, including the question of what, exactly, Seligman proposed that Cassirer contribute and when he contacted him. It is rather unlikely that he would have asked Cassirer to contribute an article on “the Enlightenment.” In 1927 Cassirer was known in the Anglophone world primarily for his work in the philosophy of science (his book on Einstein had been available in English since 1923) and for his Philosophy of Symbolic Forms (which appeared in German between 1923 and 1929 and had been widely reviewed).  The article on “Enlightenment” was not Cassirer’s first venture into writing articles for English language encyclopedias: he contributed articles on “Neo-Kantianism,” “Rationalism,” “Substance,” “Transcendentalism,” and “Truth” to the 14th edition of the Encyclopaedia Britannica (1929). Nor, for that matter, was the article on “Enlightenment” his only contribution to the Encyclopedia of the Social Sciences: he also wrote the entries for “Kant” and “Leibniz.” A glance at the bibliography on the Internationalen Ernst-Cassirer-Gesellschaft website, is enough to drive home the point that, to the extent that Cassirer was doing work in the history of philosophy prior to Philosophy of the Enlightenment, his primary focus fell on Kant, Goethe, and various other German thinkers. The locus of his concerns expanded in 1927 with his Individuum und Kosmos in der Philosophie der Renaissance and would extend still further in 1932 with the appearance not only of his book on the Enlightenment but also his influential discussion of “The Problem of Jean-Jacques Rousseau” and his book on English Platonism. It is possible (though I’m inclined to think unlikely) that Seligman was aware of the work in which Cassirer was currently engaged, but it is more likely that his main concern was with soliciting contributors rather than topics.

Even if Seligman did suggest topics to his prospective contributors, it unclear that “the Enlightenment” would have been on his shopping list. By 1927 the term was beginning to enter into general usage, not only in translations from the German (e.g., it appears in H. H. Stenning’s translation of Kautsky’s book on Thomas More) but also in a few textbooks (e.g., Stephen Duggan, A Student’s Textbook in the History of Education).  And the bibliography at the close of Cassirer’s article (presumably constructed by the editors) cites John Grier Hibben’s The Philosophy of the Enlightenment (1910), the first book in English to include “the Enlightenment” in its title.  But “Enlightenment” still had to compete with the “the Age of Reason” as a label for the period (e.g., the bibliography also cites F. J. C. Hearnshaw’s recently published Social and Political Ideas of Some Great French Thinkers of the Age of Reason) and while it is clear that, following the German convention, Cassirer would have opted for the term “Enlightenment” as a way of designating the period, it is rather unlikely that Seligman would have proposed it.

Further evidence for the relative neglect of “the Enlightenment” as a label for what was then dubbed “the Age of Reason” can be found within the Encyclopedia of the Social Sciences itself. The first volume opened with an extended account of the history of the social sciences, collectively written by various editors and associates. A survey of eighteenth-century works was included a section entitled “The Rise of Liberalism,” which was written by the British political theorist Harold Laski.4 Though Laski discusses the work of a number of significant Enlightenment thinkers, the word “Enlightenment” never appears.5

Lacunae in the Archives

One might assume that many questions about the genesis of Cassirer’s article could easily be resolved by an afternoon in the Hampshire College library (an appealing prospect this time of year) but, unfortunately, there are reasons to think that these matters are likely to be more difficult to resolve than it might at first appear. As finding aid goes on to explain,

Hampshire College did not take delivery of the files until December 1970, when they were apparently stored in the library loading dock. The decision was made not to advertise Hampshire’s possession of the files until they had been processed; however, no provision was made for processing the files. In 1974, the original boxes had deteriorated to the extent that the contents had to be repacked in new boxes in order to move them out of the loading dock …. The boxes were moved from storage area to storage area, coming under the care of the College archivist when the archives were formally established in 1980. In 1984, an outside researcher managed to track down the location of the files, and expressed interest in coming to use them. A detailed inventory of the contents of the boxes was made, and the individual series distinguished. A preliminary catalog was prepared for the researcher, who successfully used the collection that summer. However, it was apparent that the collection badly needed physical processing: although the paper of letters and manuscripts was in decent shape, the file folders were fast disintegrating and the problems caused by rusting paper clips would only worsen. Although a grant proposal covering the cost of physical processing was prepared at that time, it was not funded, and it gradually became clear that internal library resources would have to be utilized to process the collection.

Processing of the collection (which involved replacing the old file folders with acid-free ones, removing the rusting clips and aged rubber bands, and doing all the other things that need to be done to prevent paper from during into dust) would not be completed until August 1989, which — as the finding aid notes — was “twenty years after the gift had been accepted by the College.”

But, with the collection long ago secured, shouldn’t it be a simple matter to consult the correspondence files to see what Seligman might have proposed to Cassirer? Unfortunately, no: there is a significant lacuna in Hampshire’s holdings:

A large gap exists in this series: there are no files from correspondents with names beginning with the letter C; in fact, none between the letters BR and DR. This material was not present when the collection was first inventoried in 1984, and must have been lost prior to that time.

There may, however, be other material at Hampshire that could shed some light on the genesis of Cassirer’s article and it appears that there is a draft of the manuscript in the Cassirer papers at Yale.  At some point, I may get the time to visit both.  But. for now, it is time to shift the focus from wondering about what might be available and instead concern ourselves with what we have: the published version of Cassirer’s article.

Professor of History, Philosophy, and Political Science Boston University
View all posts by James Schmidt →
This entry was posted in Uncategorized. Bookmark the permalink.