As sketched last week, my plan had been to consider nine different translations of Kant’s essay on the question “What is Enlightenment?” and see how the translation of the crucial terms in essay’s opening sentence changed over the last two centuries. There was, however, a rather large gap between the first translation on my list (John Richardon, 1798-1799) and the second (Carl Friedrich, 1949). Since this gap spans the period that interests me the most, it occurred to me that I should try to fill it by looking beyond complete translations of Kant’s essay and seeing how the first sentence was translated when it was quoted in books written between 1800 and 1949.

This would simple enough to do: assuming that anyone who goes to the trouble of quoting the opening sentence of Kant’s essay will probably, at some point in their discussion, also quote Horace’s motto Sapere Aude!, I figured it would be enough to go to Google Books and search for books appearing during this period that contained the phrase “sapere aude” along with the word “Kant.” The results were not quite what I expected:  there turned out to be fewer works quoting Kant’s essay than suspected. This might be (1) testimony to the relative neglect of Kant’s essay during the nineteenth century or (2) the result of failings in my search strategy (e.g., people cited the opening sentence but typically didn’t cite the Horace quote) or (3) simply an artifact of peculiarities in Google’s scanning or metadata. But, on a happier note, I did turn up a translation of Kant’s essay that I’d forgotten about, along with one summary of the opening paragraph that is extensive enough to merit its inclusion on my list of translations.

Here, then, is my revised list, which incorporates two new translations (see items 2 and 3) of the first sentence (as before, if you know of any other examples, please let me know). I will discuss other partial translations and summaries in subsequent posts:

So, I suppose we should get acquainted with our two new entries.

Somewhere in my earlier research I’d come across Austin’s translation and, indeed, thought that I’d written about it somewhere or other. But a search of my computer turned up nothing, so let me make amends immediately: Austin’s translation is just as significant as Richardson’s and every bit as strange. I’ll have more to say about her rendering of Unmündigkeit as “pupilage” in a later post (it seems to have influenced a few later commentators), but for now it will be enough to talk about the woman herself. 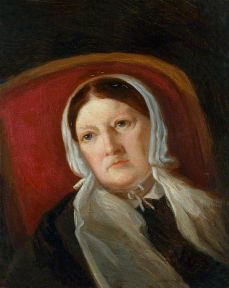 As the Wikipedia (which draws on the entries on her in the Dictionary of National Biography and the 1911 Encyclopedia Britannica article on her) informs us, she was one of the Norwich Taylors (Norwich turns out, as my brilliant colleague Arianne Chernock has shown, to have been a rather lively place, with a significant role in the history of women’s rights). Sarah Austin (1793-1867) was the youngest child of John Taylor, yarn maker, Unitarian, and contributor to the Norwich Cabinet, a radical political journal. She was one of six children and her family was closely connected to such important figures as Henry Crabb Robinson (who played a significant role in acquainting the English with German literature) and the jurist James Mackintosh (the author of Vindiciæ Gallicæ, one of the more important responses to Burke’s Reflections). Sarah seems to have been exceptionally well-educated in languages (she is said to have been “conversant in Latin, French, German and Italian”) and went on to marry the jurist and philosopher John Austin (1790-1859). They settled in Westminster and their circle of friends included John Stuart Mill and Jeremy Bentham.

There is much here that needs to be digested, but for now it may suffice to say that it is possible that Austin’s translation was the most important source for what a number of significant British thinkers knew about German literature in general and Kant’s discussion of the Enlightenment in particular (is there anybody doing any work on her?). It would be good to know more than I do about the publishing history of Richardson’s Kant collection and Austin’s collection of German texts (perhaps a quick visit to WorldCat would tell us something?), but it’s possible that it was hers was the translation of Kant’s essay that was being read for much of the nineteenth century.

The other example that I’ve added to the list is J. Frederick Smith’s translation of Otto Pfleiderer’s Development of Theology in Germany Since Kant (1890), a text that I hadn’t seen before. It might be worth reproducing the entire paragraph where Pfleiderer quotes Kant:

“Free Thought,” says Kant, “is the advance of man beyond the state of voluntary immaturity. By immaturity is meant, inability to use his own understanding except under the guidance of another. The immaturity is voluntary when the cause of it is not want of intelligence, but of resolution and courage to use it without another’s guidance Sapere aude! Dare to use thy own understanding! is therefore the motto of Free Thought.”

What we have here is a translation of the entirety of the opening paragraph of Kant’s article that follows neither of the previous translations and, as should be immediately apparent, has a novel way of translating the word “Aufklärung.”

Here’s what the Rev. James Wood had to say about Pfleiderer in the Nuthall Encyclopedia (1907) — which appears to be the Wikipedia’s source:

a philosophical theologian, born in Würtemberg, professor at Jena, and afterwards at Berlin; has written on religion, the philosophy of it and sundry developments of it, in an able manner, as well as lectured on it in Edinburgh in connection with the Gifford trust, on which occasion he was bold enough to overstep the limits respected by previous lecturers between natural and revealed religion, to the inclusion of the latter within his range.

Beyond this, I know nothing about Pfleiderer, but quite a bit of his work seems to have been translated during the nineteenth century (which probably has something to do with his having given a Gifford lecture), including an 1899 article in the American Journal of Theology. It also discusses the passage from Kant.

At the end of the last century Kant called his age the age of enlightenment, in the sense that men then began to pass from their self-imposed tutelage and resolved to use their own reason: “Sapere aude!” Dare to use your own mind!” This “motto of the age of enlightenment” has come to be the program for all the movements of our century in science, morality, law and politics.1

The translator of the article in the AJT is uncredited, but the handling of Aufklärung as “age of enlightenment” differs markedly from the way it is treated by J. Frederick Smith in his translation of The Development of Theology in Germany Since Kant. Smith had also been the translator of Pfleiderer’s 1885 Hibbert Lectures, so the claim that the translation of his 1890 book was done “under the supervision of” Pfleiderer may be worth taken more seriously than I was inclined to. Google serves up lots of J. Frederick Smiths, not all of them translators and, as far as I can tell, WorldCat doesn’t have a specific field of searching the names of translators (yet more evidence of the scandalous disregard in which the practitioners of this essential and demanding art are held). So, there’s not a lot more to say about him.

Except (if I may steal a trick from Steve Jobs), there’s one more thing.

Both Austin and Smith inserted footnotes at the start of their translations in which they reflect on the peculiarities of the German word Aufklärung. These humble footnotes are, at least for the work that I’m trying to do, priceless: they provide us with the best evidence we have of the problems translators are having in making one language mesh with another. As a rule, good translators avoid doing this: if a translation is running properly, there’s no need to remind the reader of how many compromises are necessary in order to create the illusion that languages go into each other without any friction. From the little I’ve read of her work, Austin strikes me as an accomplished translator (I should stress that I’m not) and Smith, if we are to believe the title page, had that rarest of resources: an author who is willing to help. It’s significant, then, they found it necessary to explain their problems in finding an adequate English translation of Aufklärung.

Let’s work backwards. Here’s what Smith (perhaps aided by Pfleiderer) had to say about Aufklärung:

Any translation of this terminus technicus may mislead. From Kant’s authoritative definition of the thing, it appears that our English “Free-thinking” substantially represents it.

There is much here to ponder but, for now, it may be enough to note three points:

A half century earlier, Austin was considerably less at ease with what she found herself forced to do:

It is impossible, without greater deviation from the original than I feel myself justified in making, to avoid the use of this very awkward word, which is the exact translation of Aufklärung. A more significant title would be, “A plea for the liberty of philosophizing.”

What for Smith would become a terminus technicus that could easily be translated with an English term coined at the start of the eighteenth century was, for Austin, a “very awkward word.” Why “awkward”? Perhaps because, in her circle, the convention — which James Hutchison Stirling turned into something approaching a conviction — was to leave the German term untranslated? In any case, though the word was awkward, she found a solution.

Richardson began his translation of the sentence: “Enlightening is man’s emergence….” Austin shifted from the active to the passive voice and moved the collective to the singular: “A man is enlightened when ….” At the risk of making too much of her footnote, it seems as if she was not particularly pleased with this solution.  I think she was right to displeased.

For Kant Aufklärung was a process in which individuals were engaged;  in Austin’s translation it would seem that Kant was concerned with describing a state at which individuals have arrived:  that of having attained “enlightenment.”  This may help to explain why she found it necessary to translate Ausgang as “emerges” rather than “departure” or “exit” (her rendering of Unmündigkeit as “pupilage” may follow from this, but I’ll get to that in a subsequent post). Would it be too much to suggest that her handling of the opening sentence — indeed, her choice of how to translate the opening word of the sentence — forces her into a set of moves from which it will be hard for her translation to recover?

Having translated what she took to be an awkward term rather awkwardly, her footnote explained that to do anything else would require liberties with the text that she was unwilling to take. And then she offered a title that does a rather good job of suggesting what Kant was offering: “A plea for the liberty of philosophizing.”  Her footnote partly compensates for what she has done in her translation of the opening sentence and also reminds the reader of an even earlier thinker who was engaged in the same activity in which she takes Kant to have been engaged.  Where Smith sent his readers back to  Collins, Austin sent them back to Spinoza’s Tractatus Theologico-Politicus.

Professor of History, Philosophy, and Political Science Boston University
View all posts by James Schmidt →
This entry was posted in Uncategorized and tagged Begriffsgeschichte, History of Concepts, Kant. Bookmark the permalink.