Kant for Kids (Notes on a Survivor)

Tracing the reception of Kant’s phrase “selbstverschudeten Unmündigkeit” (“self-incurred immaturity” is the current consensus on how to translate it), I stumbled on one of those things that reminds us about the books, and the worlds, we have lost: 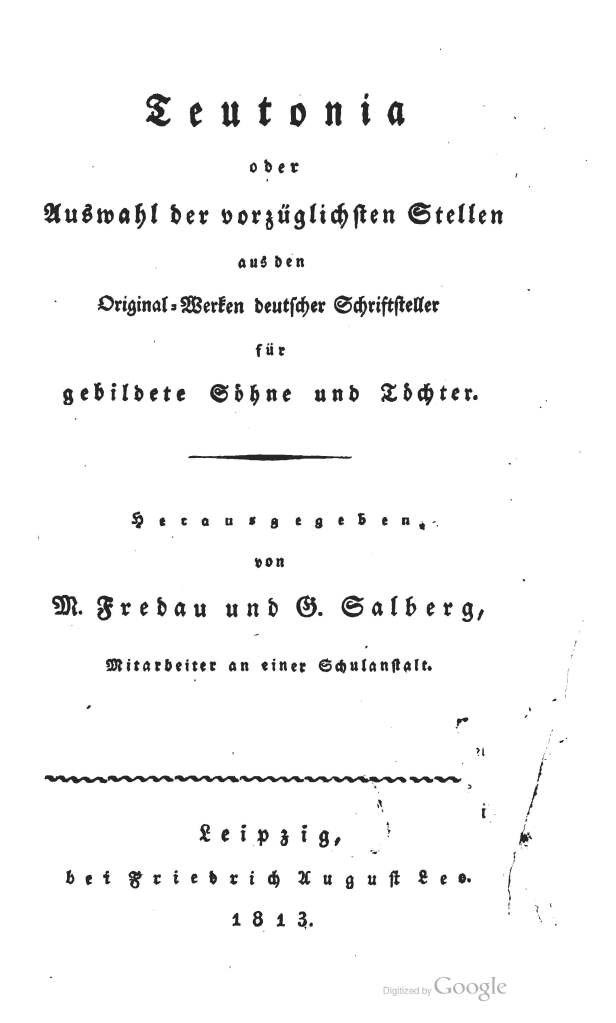 This peculiar book, swept up into Google’s scanners during their sweep through the Bayerische Staatsbibliothek in Munich, is a survivor from a vanished world: a world in which a title like Teutonia could be attached, without irony or aggression, to a book that was edited by two Jewish pedagogues and intended for the education of “German boys and girls” .

Assembled by the rabbi, translator, and writer  Gotthold Salomon (1784-1862) and the teacher and writer Maimon Fraenkel (1788-1848), it consisted, as announced on its title page, of selections of passages from the works of the “most excellent” German writers. The short extracts are organized topically and the table of contents gives a hint of the ambitions of the collection:

The seventh item in the section dealing with  “Reason and Truth” assembles a few passages from Kant, the last of which consists of the entire first paragraph of Kant’s essay on the question “What is enlightenment?” 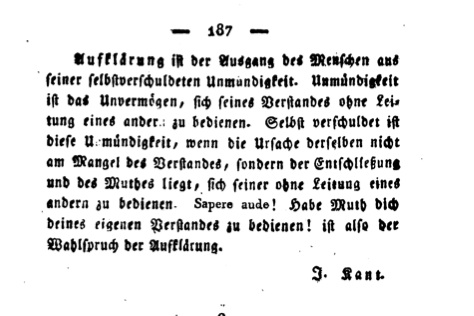 Here, then, is one of the places where boys and girls from Jewish families, immersing themselves in what their families regarded as the culture to which they belonged, would have encountered Kant’s words.

Adorno famously wrote that Mahler turned “cliché” into “event.” Looking at this frontispiece I couldn’t help thinking about the way in which history turns kitsch into monuments.

Professor of History, Philosophy, and Political Science Boston University
View all posts by James Schmidt →
This entry was posted in Uncategorized and tagged Kant. Bookmark the permalink.

1 Response to Kant for Kids (Notes on a Survivor)